As a multi-layered regulatory polity the European Union has been the centre of discussions about whether it should shift through more democratic system of governance or keep its current regulatory nature. While the debate continues, I would argue that the EU should be considered as unique experience evolving in a way that would maintain and improve its influence on the global political arena. To do this, it should keep its current formation of decision-making and act like a regulatory agent. 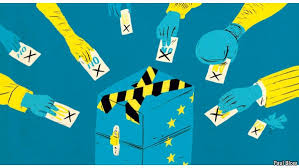 When seen as a game theory of winners-losers, it’s not surprising to characterise EU as an arena of power wars. While the bigger and powerful member states wants to keep their current position, the smaller ones are looking for changes in EU’s administrative structure. Undoubtedly the more Member States integrate, the harder it gets to compromise. In short they want more democratic EU in hope of gaining a more effective position in decision-making processes.

Depending on the democratic model adopted, the ongoing discussions are mainly in two different veins: first one deliberates the EU as a majoritarian democratic polity which should in return give the European Parliament more executive power. On the other hand the non-majoritarian democracy supporters posit that the EU is a regulatory state and as a result of that it should stay out of more politicisation. Now we should explain the strengths and weaknesses of the two arguments and try to derive some conclusions so that we would be able to offer new prospects to this debate.

The Majoritarian Democracy and Politicisation

Basically the solution they offer is direct election of the European Parliament (EP) and giving greater executive power to EP. These two conditions have been largely satisfied in time. But they are still unsatisfied with the fact that European elections are not taken seriously by the European citizens. The point being is political contestation promotes better governance, fosters political debate and empowers political and civic identity. Looking at things this way suggests that the classic characteristics of representative democracy such as institutional controls, conflict resolution in a nonviolent way, representation of interests in legislative arena, public inclusion and political participation should be assembled at the European level. So EU should dispense a competition of elites to win the consent of people in order to rule or govern them.
The Non-Majoritarian Model and Delegation

For this side, the EU uses regulatory policies rather than redistributive policies which mean it is not a classical state that provides social security, health care etc. As a result of this regulatory nature of EU, democracy in classical terms would be unnecessary and even harmful. Moreover what EU experiences today is not a deficit in democracy but a credibility crisis and the solution should be making small changes in decision making processes rather than changing the whole institutional body of the EU.
EU has legislative power but lacks the fiscal capacity which is a good excuse to stay out of democratic accountability. The functions of EU are technocratic and complex and this leads to an inevitable shift to centrist policy-making process. This argument values technical knowledge and delegating some powers to European level bureaucrats and cares less about the legitimacy and accountability of policies. They offer set of control mechanisms and other means of constitutional checks and balances to ensure system works efficiently. Basically they offer a system which is always under control without the need for democratic control.

Future of the EU

The question is does the EU suppose to fulfil the requirements of democratic models which are developed and valid for nation states? Is it realistic to expect transparency, accountability, efficiency and so on from a polity with such a huge body and impact on more than 400 million people and almost all over the continent of Europe?

The EU still needs improvement on its structure in order to become a more democratic polity. First of all, EU should deal with the absence of European wide people and create “we-feeling” to soothe its citizens and pay attention to their preferences and needs. Secondly, there should be well-organized channels of information between citizens and decision-makers. Thus includes forming a well-structured European party system and creating media to reflect public opinion. Thirdly, EU should find methods to tackle the contemporary trend of political apathy and low turnout. It’s a massive job considering the size of the Union. Still the salience of this problem should be deemed with utmost concern because it directly reflects the lack of democracy.